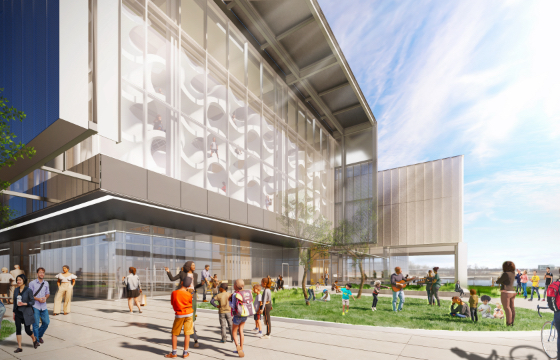 Omaha World Herald article from August 27, 2020 can be viewed on their site here

A new jewel is coming to Omaha’s riverfront.

Ground will be broken this fall for a privately funded $101 million science museum that backers hope will rank among the nation’s best.

Architects’ renderings of the new science center show a sizable glassy structure on city parkland at Lewis & Clark Landing, with views of downtown, the Missouri River and the Bob Kerrey Pedestrian Bridge.

The community leaders behind the project hope the new science center will become a family-friendly and fun entertainment destination when it opens in 2023 — filling a longtime void in the city’s cultural amenities. But more than that, they hope it will inspire children’s interest in science, math, engineering and technology, helping to fill a critical need for workers in those STEM fields.

“We believe this innovative community space will have a powerful and lasting influence on fueling our city’s workforce development,” said Bruce Grewcock, chairman of Omaha’s Kiewit construction company.

Grewcock led planning for the project on behalf of Heritage Services, the influential Omaha philanthropy organization that has been behind numerous major civic projects in Omaha over the past three decades. Heritage is tapping donors to raise all of the money for the science center.

While the project will join the ranks of what are generically known as science museums, Heritage officials like to refer to the new facility as a “science center” because its exhibits won’t be static. Instead, they’ll be designed to be hands-on and interactive and feature the latest technology.

Most science museums around the country have followed this trend, often referring to themselves as science centers or discovery centers, with missions to unlock curiosity and make science accessible to all.

To help ensure that the Omaha center does rank with the country’s best, Heritage has partnered with one of the nation’s premier science museums to develop the center’s exhibits and programming.

San Francisco’s Exploratorium, along the waterfront in the heart of that city, is routinely ranked among the nation’s top handful of science museums. Exploratorium officials currently working on exhibits for the Omaha center say they will be state of the art while also reflecting the unique culture and history of Omaha and the region.

The new science center does not yet have a formal name, but “Kiewit” will definitely be a part of it.

Not all of the money for the center has been raised, but Jacobson said Heritage is confident that the fund drive will be completed. That’s why Heritage is looking to break ground by late October or early November.

The $101 million that Heritage is raising includes construction costs, exhibit design and fabrication, and one year of operating expenses — plus an endowment that will provide for the future sustainability of its operations.

The facility will feature 82,000 square feet — about the same total area as 1½ football fields — spread over two floors. Omaha-based HDR is serving as lead architect and engineer on the project.

Because the museum will be built on city parkland, the Omaha City Council next week will be asked to approve a long-term lease agreement with Omaha Discovery Trust, the new nonprofit formed by Heritage that will develop and operate the science center.

The museum will be at Lewis & Clark Landing in the area of the long-defunct Rick’s Cafe Boatyard restaurant. It’s north of I-480, east of the CHI Health Center and south of the National Park Service’s Midwest region headquarters and the Kerrey bridge.

Omaha Mayor Jean Stothert called the museum a perfect complement to the ongoing $300 million revitalization of the city’s downtown and riverfront parks, $250 million of which is being funded by private donors. The museum will bring the total value of the riverfront facelift to over $400 million, with nearly 90% of those dollars from the private sector.

Stothert said the project shows the importance of the Omaha philanthropic and business communities and is a tribute to the engineering heritage built in Omaha by companies like Kiewit. But she also hopes it will encourage Omaha’s young people to become the city’s next generation of engineers and scientists.

“I am thrilled with this project,” Stothert said. “It’s really, really positive for Omaha.”

Plans for The RiverFront — the name given to the parks overhaul — show the science center integrated into Lewis & Clark Landing, next to a destination children’s playground. Other nearby attractions include a boardwalk, sports fields, a renovated marina and an urban beach.

The science center’s origins also can be traced to that park redevelopment project.

When the philanthropists behind The RiverFront project were considering the kinds of amenities they wanted to see, they began to consider types of attractions that could be used all months of the year. A science museum came into focus. And it’s not surprising.

When looking at Omaha’s range of cultural destinations and tourist attractions, from arenas to arts centers to museums and the zoo, a science museum has long been a gap. Most of the other major cities in the Midwest — Des Moines, Kansas City, Wichita, St. Louis, Minneapolis, Oklahoma City, Denver and Chicago — have science museums.

Kiewit and Grewcock, who serves on the board of directors of Heritage, became interested in the idea and led Heritage efforts to study and develop it. Heritage officials traveled all over the country looking at different science museums.

Of all they saw, “they were especially excited about the Exploratorium,” Jacobson said. When they then learned that the Exploratorium has a global consulting division, the Omaha group decided to contract with it to develop the exhibits and programming for the Omaha center.

Among the Exploratorium’s many unique features are a Tactile Dome, where visitors feel their way through total darkness; a station where kids can make bubbles big enough to hold their parents; and an “anti-gravity” mirror that makes viewers appear to fly.

And it’s not just for kids. Silva Raker, senior business director of global collaborations for the Exploratorium, said nearly two-thirds of the visitors to the San Francisco museum are adults. For example, it runs an adults-only program on Thursday nights, covering topics like the science of humor or transit technology — and even the science of drink mixing.

She said the idea that a science museum experience can spark an interest in STEM careers is real. A research study once found that those who end up in such careers often have a learning experience by the time they’re in middle school that sparks and excites them.

Raker and Heritage officials were not yet ready to tip their hands on the specific features of the Omaha exhibits, but Raker said they would be “engaging and fun and interesting and beautiful.” The Omaha project is among the biggest the Exploratorium has ever taken on, she said.

“I’m super-excited about it,” Raker said. “I think some of the things we are doing here are going to set a new bar for marrying the universal aspects of STEM with an incredible natural history and a community that’s ready to engage.”

Jacobson said the science center during the week will partner with schools and be a resource for students and teachers. But it will also be the kind of place kids will want to go on the weekends.

She said it’s hoped that the center’s wide reach in the community will ultimately boost interest in STEM careers among historically underrepresented groups like girls and children of color.

Said Jacobson: “The range of learning that will happen there is really exciting.”